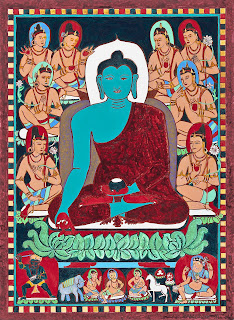 The celestial Buddha known as Master of Healing, the Lapis Lazuli Radiance Buddha (Skrt: Bhaishajya-guru vaidurya-prabha tathagata) is one of the most important figures of the Mahayana Buddhist pantheon, appearing in various chapters of the Lotus Sutra.

The Medicine Buddha is blue in color, which refers to the color of lapis lazuli, which is the name of his pure land or paradise located in the east.  He is related to the cosmic Buddha Akshobhya as both are depicted as blue and both reside in the east.  The Medicine Buddha is also related to Gautama as both are depicted in plain dress with no jewelry ornaments, and both are shown holding a begging bowl.

The Medicine Buddha is shown with his left hand in the meditation mudra holding a begging bowl made of lapis filled with amrita.  His right hand is extended in the gift giving mudra while also holding the myrabolean fruit which is noted for its healing qualities.  To the Medicine Buddha's right and left are bodhisattvas representing the moon and the sun.  While the six figures in the upper area could be indentified as members of the Medicine Buddha's assemply, more probably they, plus the Medicine Buddha in the center, refer to the ritual associated with the seven Buddha brothers, described in esoteric texts popular in Tibet and Nepal (Raoul Birnbaum, The Healing Buddha, Boston: Shambhala, 1989, pp. 92-5)  At the bottom of the picture are depicted the 7 precious jewels:  the 7 possessions of the chakravartin:  elephant, general, minister, queen jewel, wheel (chakra), and horse (white in color).

While Buddhist medicine makes use of various physical healing methods, illness is primarily considered to be any state that is not enlightenment, and medicine is the dharma.  Healing is the gradual elimination of the 3 inner poisons of lust, anger, and delusion.
Posted by Ruth Pasquine at 12:14 PM No comments: 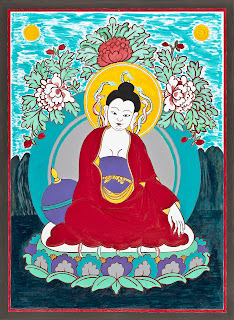 Nagarjuna's life is shrouded in myth.  He was an Indian mahasiddha, who lived sometime around the 1st c. AD.  He is noted for writing a tremendous number of texts, the most important of which is the Prajnaparimita Sutra (Discourses on the Perfection of Wisdom).  The story is that Nagarjuna obtained this text from the nagas, the snake gods who live deep underwater.  For this reason he is shown with snakes around his head.  Arjuna, the second part of his name, means white; hence his skin is white.  He is shown with a treasure vase, indicating the importance of his contributions.

The Prajnaparimita Sutra is the foundational text of Mahayana Buddhism.  In depictions of Manjushri, the Bodhisattva of Wisdom, he is shown holding it in his left hand.  Another widely-read text brought forth by Nagarjuna is the Root Treatise on the Wisdom of the Middle Veiw. For more on the miraculous life of Nagarjuna, see Glenn Mullin, The Flying Mystics of Tibetan Buddhism, Chicago: Serindia Publications, 2006, pp 29-32, 102-7, 133-4.

James Churchward, in his book The Sacred Symbols of Mu (1933), reports that the Nagas were the earliest settlers in India, highly educated and cultured, who were overcome and chased north by the Aryans, who then established the Brahmin caste  (p. 274-5).
Posted by Ruth Pasquine at 11:47 AM No comments: 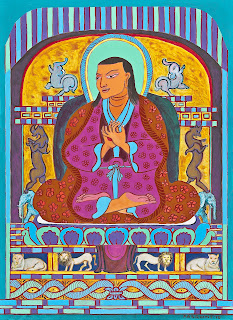 Marpa Lotsava  (1012-1097) made important contributions to the spread of Buddhism in Tibet by traveling to India, studying with Indian Buddhist teachers, and bringing back and translating important texts.  He founded the Kagyu order and most famously was the teacher of Milarepa.

This work was inspired by a 13th century Tibetan thanka which shows Marpa in a faily idealized light, compared with other depictions that show him with a stern countenance that accords more with the gruff and difficult personality described in biographies.
Posted by Ruth Pasquine at 10:46 AM No comments: 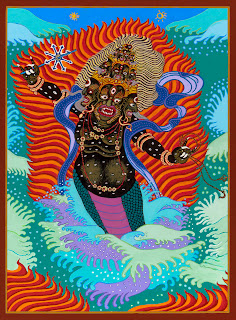